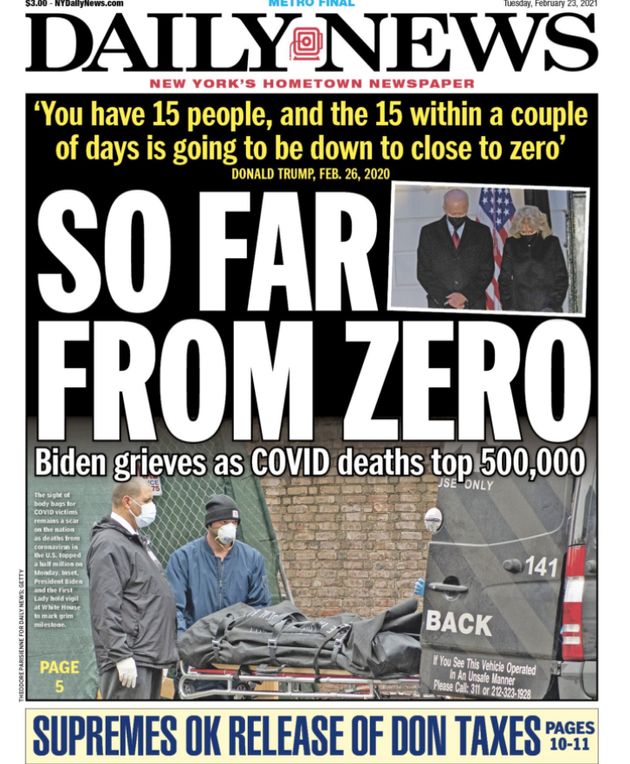 The New York Daily News marked the grim national 500,000 death toll from COVID-19 on its front page Tuesday with an old quote from ex-President Donald Trump.

The tabloid newspaper’s cover recalled the then-president boasting on Feb. 26 last year that there were only 15 cases of the coronavirus in the United States and that those infections “within a couple of days is going to be down to close to zero.”

“So Far From Zero,” the headline screams in capital letters:

Trump’s claim, however, contradicted his own admission in a Feb. 7, 2020, telephone call with journalist Bob Woodward that the virus was “deadly.”

“You just breathe the air and that’s how it’s passed,” Trump told Woodward at the time. “And so that’s a very tricky one. That’s a very delicate one. It’s also more deadly than even your strenuous flus.”

Despite his private acknowledgments, Trump in public later repeatedly downplayed the threat posed by the virus, mocked people who wore masks to curb its spread, and touted unproven drugs and the injection of disinfectant. He finally contracted COVID-19 himself and was hospitalised for three days.

His administration’s shambolic response to the pandemic and his success in politicising prevention efforts as a culture war issue helped make the U.S. the world’s leader in deaths and infections.

Never miss a thing. Sign up to HuffPost Australia’s weekly newsletter for the latest news, exclusives and guides to achieving the good life.

High-level Covid restrictions to remain until at least April 5: Taoiseach