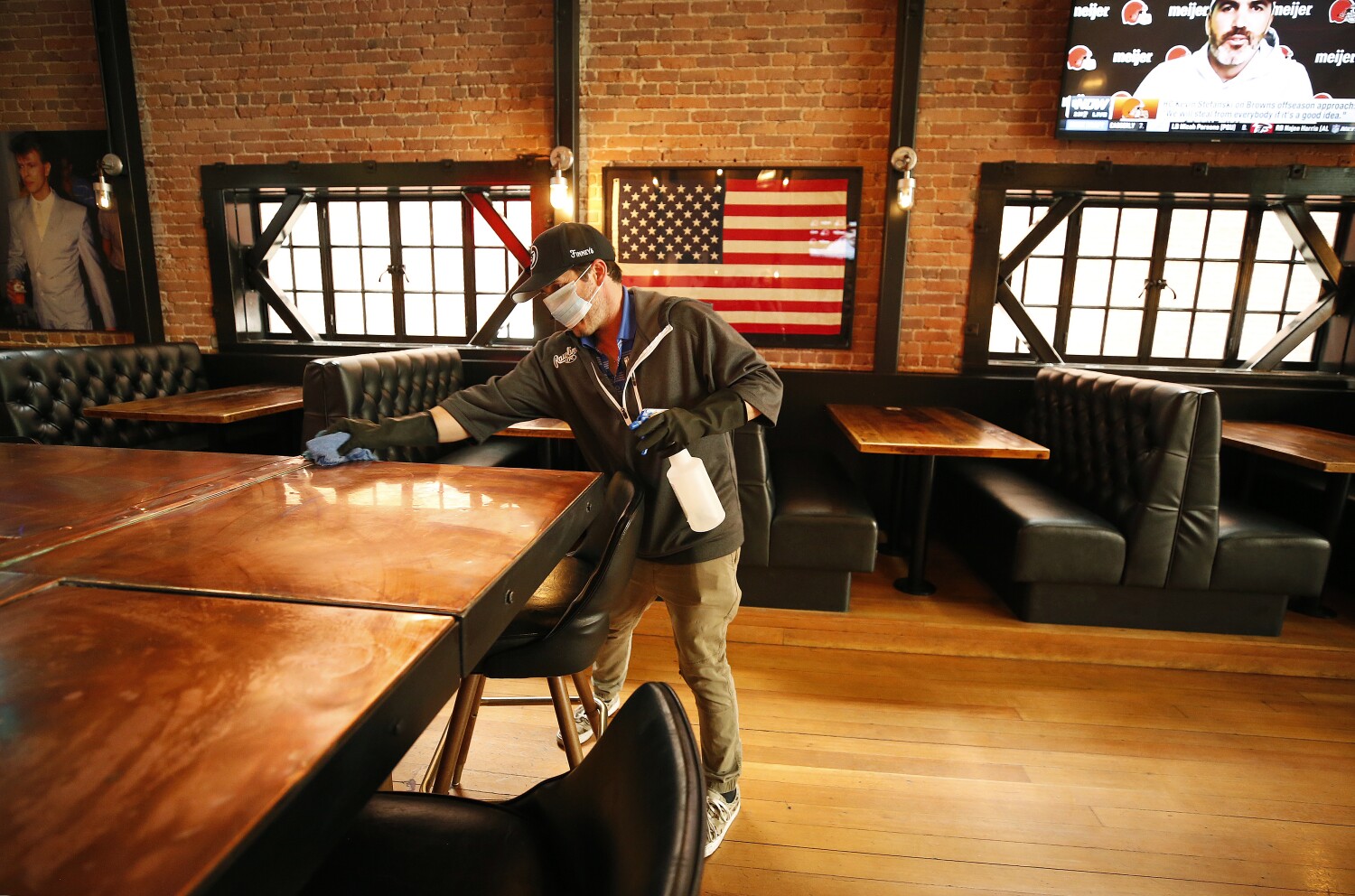 Five more counties have moved into the orange tier of the state’s COVID-19 reopening system — continuing a sustained and sweeping unlocking of the economy as case rates remain low and vaccinations ramp up.

Those advancing from the red tier to orange were Fresno, Santa Barbara, Kings, Calaveras and Mono counties, according to data from the California Department of Public Health.

Making it to the second-most lenient category of the state’s four-tier color-coded blueprint will those counties to further relax coronavirus-related restrictions on businesses, activities and public spaces starting Wednesday.

Counties that reach the orange tier can allow bars to reopen outdoors with some modifications. Bars are also no longer required to serve food.

Amusement parks can be open at up to 25% capacity, and fan attendance is allowed at 33% capacity for outdoor sports and live performances.

Bowling alleys, card rooms and satellite wagering sites also can reopen indoors, each at 25% capacity and with certain modifications.

Capacity restrictions can also be lifted in stores, although social distancing and other safety modifications still apply. Allowable attendance can also be increased at museums, zoos and aquariums; restaurants and movie theaters; and indoor gyms and yoga studios.

Offices in nonessential industries also are allowed to reopen, though the state says employees should still be encouraged to work remotely.

The state’s rules serve as a floor. While counties can opt to keep stricter regulations in place if they so choose, they cannot be more lenient.

With the latest moves, 38 of California’s 58 counties have now reached the orange tier, and three have entered the final yellow tier. Seventeen counties remain in the red tier, and none are left in the strictest purple tier.

Compare that with March 9, when 34 counties were still in the purple tier and only four had made it to orange or yellow.

The rapid reopenings over the last six weeks have been fueled by two inversely related trends: a drop in the reported number of new COVID-19 cases and a steady increase in how many Californians are vaccinated for the disease.

Over the last week, California has reported an average of 2,359 new COVID-19 cases per day — an 11.3% decrease from two weeks ago, according to data compiled by The Times. The state hasn’t had sustained case rates that low since last spring.

At the same time, California is now administering hundreds of thousands of vaccine doses every day.

So far, 43.7% of Californians have received at least one shot, and 25.4% are fully vaccinated, according to figures from the Centers for Disease Control and Prevention.

While the overarching goal is to administer as many vaccines as quickly as possible, state officials have emphasized that it’s vital to ensure the doses are being distributed equitably.

To that end, California set a goal at first of administering 2 million, and then 4 million vaccine doses in the state’s hardest hit and most disadvantaged communities — those in the lowest quartile of a socioeconomic measurement tool called the California Healthy Places index.

In support of that effort, California has, since early March, devoted 40% of its overall vaccine supply to the targeted communities.

As residents of those neighborhoods were among those most likely to suffer from or unintentionally spread COVID-19, state officials said improving vaccine coverage in those areas was critical not just to armor them against the pandemic, but to make it safer for the entire state to forge ahead with reopening.

Upon hitting the 2-million dose mark in mid-March, California reworked its reopening blueprint to make it easier for counties to escape the purple tier.

Hitting 4 million doses, which happened in early April, triggered provisions that lowered the thresholds necessary to enter the orange and yellow tiers.

Entering the most lenient yellow tier now takes an adjusted daily new case rate of below 2 per 100,000 people. The old requirement was less than 1.

However, even that relaxed requirement is a hard hurdle to clear. Only Alpine, Lassen and Sierra counties have made it to the yellow tier so far. A handful more, including Santa Cruz, could join them as soon as next week if their numbers hold steady.

Counties must record two straight weeks of qualifying data to advance to a less restrictive tier and have to stay in a tier at least three weeks before moving again.

As a result, counties with case rates still outside the yellow range — like Los Angeles, 2.7; and Orange, 2.8 — remain at least two weeks, and more progress, away from potentially moving forward.

The two other metrics used to assign counties into tiers — the rate of positive test results and a health-equity metric applied to ensure that the positive test rate in poorer communities is not significantly higher than the county’s overall figure — have remained unchanged.

While the revisions have made it easier for counties to advance through the framework, the tiers themselves are not long for this world.

Officials have set a target date of June 15 to move beyond the blueprint entirely and fully reopen the state’s economy.

Dollar erases losses after diving below ¥108 in Tokyo trading

Dollar erases losses after diving below ¥108 in Tokyo trading